We Are Open – Safety is Our Top Priority! We’ve reopened in accordance with CDC, O.S.H.A., and State Dental Board guidelines to responsibly resume seeing our patients for regular dental appointments and treatment. We want to assure you of the measures we take to maintain a clean and safe environment so you can continue to receive needed dental care without fear or concern. 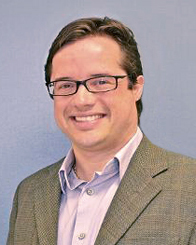 Dr. Oliver’s extensive expertise in the areas of periodontics and dental implants has earned him the appreciation of his patients and the admiration of his colleagues.

After receiving his dental degree, he continued his studies by completing a General Practice Residency and an Advanced Education in General Dentistry Residency. Fervently committed to his chosen calling, he maintains memberships in the American Academy of Periodontology and the Academy of Osseointegration.

Married with two daughters, he is a die-hard volleyball fan and faithfully follows the U.S. and Brazil national teams.

Complete the form below to request your appointment today.

CareCredit is a healthcare credit card designed for your health and wellness needs. Pay for the costs of many treatments and procedures through convenient monthly payments.

New patients are welcome! To request an appointment use our online form or call: